For additional information on individual members click on their name. 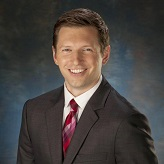 Adam Slinger joined JPMorgan Chase in the summer of 2022 as a communications manager after a twenty-year career in journalism. As an Emmy-award winning reporter, Adam hosted "Good Day Columbus" and "Good Evening Columbus" on ABC6 and FOX28. He previously worked in Phoenix, Arizona, Oklahoma City, Oklahoma, and Beaumont, Texas. Before making the leap in front of the camera, Adam worked behind the scenes at the weekend edition of NBC's "Today". At 30 Rockefeller Plaza in New York City, he produced and booked exclusive guests for the morning program and assisted in the production of several NBC News Special Reports, including the space shuttle Columbia disaster, Operation: Iraqi Freedom, and the capture of Saddam Hussein. Adam has a bachelor's degree from New York University where he studied politics and American history. He also spent several months in London, England studying Middle Eastern politics and the British media. Originally from Dublin, Adam and his wife, Jill, have three children.

We Appreciate Our Community Impact Partners!